We want to thank all our fans who voted for us last week in Classic Rock Magazine and let you know that âThe Great Unknownâ won #1 track of the week. We recently did an interview with the worldâs best rock magazine, so look for that in the February issue. Pretty surreal to a couple guys from small town Kentucky. Thank you TCS fans!

Hear “The Great Unknown” on Spotify!

The album “Mountain” available for purchase at these digital outlets.

“Mountain” Available on cd and vinyl at our squareup store! 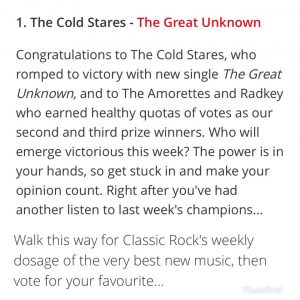 Ok Cold Stares fans we need YOUR HELP! We are big fans of Classic Rock Magazine and this is a big deal weâve made their radar. PLEASE click the link, scroll through the bottom and vote for The Cold Stares âThe Great Unknownâ. After you have, comment âdoneâ below and be in the running for a new Cold Stares long sleeve T-Shirt given away November 25th! Please share with your friends vote often, and help us get as many votes as possible! 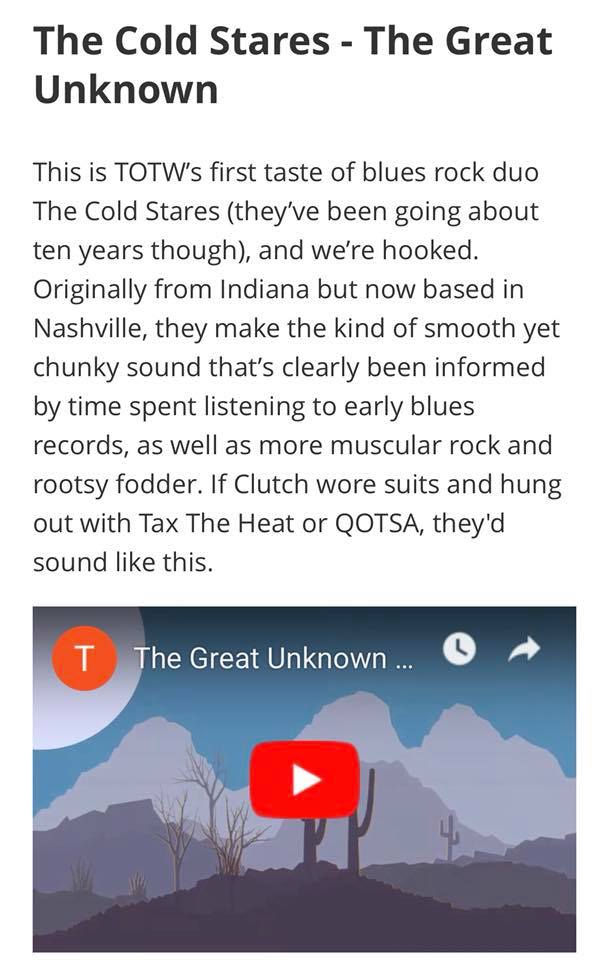 TWO DAYS until the official release of Mountain. So much news coming your way today, new reviews, new playlists adds, continued success leading up to this release and we want to thank all of you again for your role in helping getting the word spread and turning people on to our music.

Today Iâll break down the first track on the album âThe Great Unknownâ. Lyrically this is one of my favorite songs Iâve ever written. Itâs set in the open western landscape as early Americans travel west. The songs meaning is really that no man knows his future. No two days are exactly alike in our lifetime, and if you make plans and think you know exactly how your life will go you can bet it will not follow that path. I was focusing on settlers moving west and how that must have felt, not knowing what the future would hold, so many obstacles, such beautiful land, how native Americans must have felt. Life was so hopeful then, but also so fragile.

First verse a stranded young husband has lost his wife, standing on a hill, looking up and questioning God. Meanwhile his brothers have made it out west and have hit gold. Their sister broke, has turned to prostitution in an effort to stay alive.

Second verse we have an man coming back north from a train robbery in mexico, perhaps to get money to start his family back home. In the meantime his wife at home has taken up with another man, by the time that he gets home he has lost what he sat out to build.

Third verse a solider has returned from a battle and finds a war tribe has destroyed his home and killed his family. It discusses the topic of revenge and war and how that cycle never seems to end.

Young man stands high on a hill shakes his fists at the sky above.
Down below in the valley thereâs a grave with a name of a woman he loved.
Out west cross the rivers and plains now his brothers striking rich with gold
Their sister in hotel room working money off a man she knows

Pale rider on a jet black mare, got a rifle and a .44
500 dollars from a train he robbed down south in Mexico
Back home now his wife got a suitor, got a ring and an evening gown
By the time that he reach Sioux City, she done laid that poor boy down, down, down