If you hadn’t noticed all the links on the front page, “Hard Times” from the upcoming LP “Heavy Shoes” on Mascot Records released today! Check it out! Hope you all dig it! 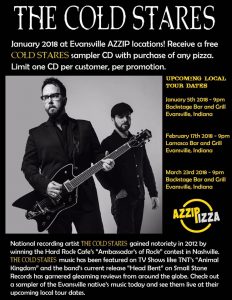 Great review of “Head Bent” from our brothers in Moscow. Translated below-

The Cold Stares “Head Bent” (2017)
June 16, its first release in 2017, the year introduced a well-known independent rekod-label from Detroit Small Stone Recordings. CD and vinyl released a new full-length album THE COLD STARES from Nashville, the capital of Tennessee.
The Cold Stares
THE COLD STARES fans of swamp-blues, neo-hardcore and stoner music should be well acquainted. Starting in 2008, the duo Chris Tapp (vocals, guitars, keyboards) and Brian Mullins (drums, percussion) won prestigious contests, went to national tours, performed at leading TV channels, played at prestigious festivals, composed and recorded music … led Costly litigation with the powerful record companies with whom they once argued contracts. The discography of the group includes: the full-length album “A Cold Wet Night And A Howling Wind” (2014), EP minions “Resonator” (2015), “Look Over Yonder Hill” (2015), “Dark Dark Blue” (2016) and ” The Southern “(2016), as well as several singles. On physical media, the recordings of THE COLD STARES were issued in a very limited number, due to the copyright conflict. But the digital versions had considerable success: for example, only on Amazon the digital version of the debut album was purchased by more than 25 thousand people … With the release of the album “Head Bent” on Small Stone, the music of THE COLD STARES again became accessible to disk collectors after a rather long break.
The 37-minute album included 11 new songs, produced directly by the authors – only new material that can be freely published and reprinted. Stylistics of changes has not undergone – THE COLD STARES are played electrified-weighted blues-rock with strong influences of authentic delta blues and ruth-americans.
According to the main song writer of the duo Chris Tapp, careful preservation of the authentic spirit of root American music is the main task of the team. “From the very beginning we tried to create music that we ourselves wanted to listen to … its strength is that we play what is natural for us and what is natural in those parts where we come from …”
The Cold Stares
Lyrics in the songs THE COLD STARES is primary. It is written and performed in a narrative-chanting “swinging” vocal manner typical for the American South and has a tangible personal character (which, among other factors, is affected by the fact that Chris Tapp has been fighting cancer for several years already). Absence of falsehood and posturing, maximum openness and sincerity of the message is exactly what has long attracted listeners of different ages and tastes to the songs of the duo. Instrumental accompaniment is quite simple: a massive, energetic rhythmic bit-groove; A moving, hard guitar riff and an occasional background moaning of the organ in the background. There are things in the program of the album more dynamic (“Head Bent”), but more than those that can be called mid-tempo heavy-action fighters on the blues base, in some cases the most direct relation to the traditionally proto-think (“Neighbor Blues”). In some rooms, the duo evokes associations with the great hard bands at the turn of the 60-70s Led Zeppelin, Free, The Groundhogs, Jimi Hendrix, Jeff Beck, Peter Green … (listen to “John”, “Price to Pay”, “Caught in the Weather” , “Ball and Twine”, “One Way Outta Here”).
The Cold Stares
The sound of THE COLD STARES is vintage-analog, garazhno-working, rough-rough, without any gloss and glamor … and very rich – it’s hard even to imagine that it’s all played by only two musicians (although with the current recording technology, you can literally do that Anything, there would be talent, taste and skill sound engineer). In many notes, the Nashville duo is compared to the commercially successful The Black Crowes … not without reason, although Chris Tapp and Brian Mullins have their own and song-rhetoric, and the performing zest that makes the songs of the band very special (which is the acoustic album ” Break My Fall “- alas the only thing on the album of this kind). Well … it remains only to congratulate the band and release the label with a decent album. I would like to think that this is only the beginning of a long and fruitful cooperation.

Head Bent is the newest full-length album from Nashville rock duo The Cold Stares and the band has released the entire thing now for streaming. The album was… Puregrainaudio.com