A LETTER TO OUR FANS-

The Cold Stares last album âHead Bentâ came out June of 2017 on Small Stone Records as most of you know. Weâve had some amazing success with it, including âBreak My Fallâ and âHead Bentâ entering Spotifyâs curator playlists. We acquired a new booking agency. Weâve done some amazing shows in the last year with a lot of globally known rock bands and heroes of ours. We recently had our song âHead Bentâ featured in Monster Energyâs new film/commercial. We now have a global fan base that we interact with weekly, and have shipped and sold vinyl literally around the whole world. Things are great for The Cold Stares, and in no small part to you guys- our fans that are reading this.

Around Christmas we started thinking about, and writing for the next album. We knew around June we would be a year into the album cycle and would want to put something out after that. We got confirmation from our label that they were interested in putting out another album with us, and we discussed signing with some other record labels. After much discussion, thoughts and prayers weâve made up our mind on our immediate path forward.

With the current musical landscape, artists really only make money a couple of ways. Streaming is one. Hereâs the math for you. About every million streams produce about 5k. Itâs insanely hard to make any real money by streaming. We all do it, it is the nature of the beast now, we are not complaining, we are explaining. Good and bad things about streaming, one is that we can see that around 15,000 Brazilians stream our music monthly.
The second way an artist makes money is playing shows and touring. Most major labels now have what they call â360â deals, which mean when you sign a deal with them the label collects money on ALL aspects of your career, including touring, merchandise sales, and publishing. Which means literally you can go on tour, make thousands of dollars, but after incurring the touring costs, come home owing the record company money.
The last way Iâll mention that an artist makes money these days is publishing/licensing. This is a huge deal to us. This is when TNT pays us to use our song âSleeping with Lionsâ for their show “Animal Kingdomâ. Or Monster Energy pays us to use âHead Bentâ for their commercial. This revenue stream is the largest now for most artists, and a lot of us use this money to fund tours, record records and continue careers. Sadly, now almost all record company deals have the record label keeping the publishing for the recorded songs.

Another thing that record companies can do is decide what kind of album you will record, and what songs will obviously be on it. Which means, they can tell you not to have a song like âJesus Brother Jamesâ on the same album with another religious themed track. Or, for arguments sake, could say the same about âNeighbor Bluesâ and âJohn”. At this point in our career, Iâm personally not willing to have anyone decide that. And again, letâs be honest here- if itâs a million dollar deal we can have that discussion because we are trying to feed our families- but if itâs 50k and the label keeps all publishing, no- you donât have the right to tell me what kind of artist The Cold Stares will be. Luckily we had none of those issues with Small Stone records and they were amazing on letting us put out the record we wanted. Our decision for the next album not to be on Small Stone records has nothing to do with that, nor do we have ANY complaints about SS regarding artistry.

However, for the following reasons described above we have decided to continue with our OWN label and fund with record with ourselves and with our fans. We will be starting a kickstarter in the following month that will detail out our plans for the next album, with some amazing incentives for our fans, friends and families to help us and contribute and do this on our terms. This will allow us to keep the publishing rights for OUR own songs, keep the budget from being over-bloated. It will allow us to personally hire the team of people we want working with us to record and promote the album, and it will allow us to make the record we want to on our terms with our fans.

What we can tell you now.
The album will be called WAYS. It will be recorded in two halves. The first half of the album will be recorded in Memphis and Mississippi and this half will feature blues-rockers and show the influence that this area has had on us in the last ten years. The second half of the album will be written and recorded in the southwest desert this summer and will feature acoustic based western themed story songs in the vein of âBreak My Fallâ. The second side of the album will showcase this side of the band that has been a huge part of our success as well. We will have a videographer with us for the entire recording of the album, which will produce a documentary as well as videos from the entire recording process which will be included for all our contributors.

We will have vinyl of the album, world wide distribution, and a larger press and PR presence than all of our other projects combined.

We are very grateful for all of the support we have received over the years from you all. When we look back on the things we’ve accomplished from winning the Hard Rock contest, to the battles with lawyers and labels, cancer, overcoming and retaining our identity, it’s amazing to us. From the Duck Inn to the Viper Room, to the Delta, it’s been an amazing journey for us. We are aware of who we are as a band, where we come from, who put us here, where we want to get to, and the album we need to make to do so. “WAYS” WILL be that album. We have the best fans in the world, and we are very excited to share this process with you, including you, and for you. More details to come over the next month. See you on the road- Please share- 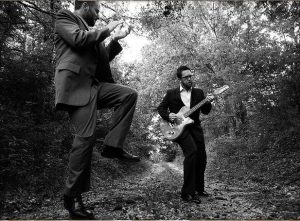